Curious to learn the words to the Swedish national anthem? Look no further!

You can pretty much count on every Swede knowing the words to snapsvisor (drinking songs), such as Helan Går. But you are also likely to hear the Swedish national anthem played at sporting event, during midsummer, or even at sittnings (a formal party) and the Swedes will definitely sing along then too! It is also always played at the welcoming ceremony for new Swedish citizens!

Thou Ancient, Thou Free

Thou ancient, Thou free, Thou mountainous north
Thou quiet, Thou joyful [and] fair!
I greet thee, loveliest land upon earth,
Thy sun, Thy sky, Thy climes green.

Thou thronest on memories of great olden days,
When honoured Thy name flew across the earth,
I know that Thou art and wilt remain what thou werest,
Yes, I want to live, I want to die in the North.

Tell me, what is it with Swedish songs getting dramatic at the end?!

Curious in hearing Sveriges nationalsång? Listen to it here:

Hope you learned some new Swedishness today and I’ll see you in the next post!

2 thoughts on “Sweden and the National Anthem”

Welcome to Sweden and Me 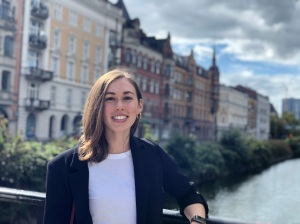 Hej hej! Since moving to Sweden from the US in 2018, I have been immersing myself in all things Swedish. I’ve learned a lot about this special country and am here to share my knowledge.

Whether you’ve been thinking of moving to Sweden yourself or just want to better understand what Swedishness is all about, this is the place for you!